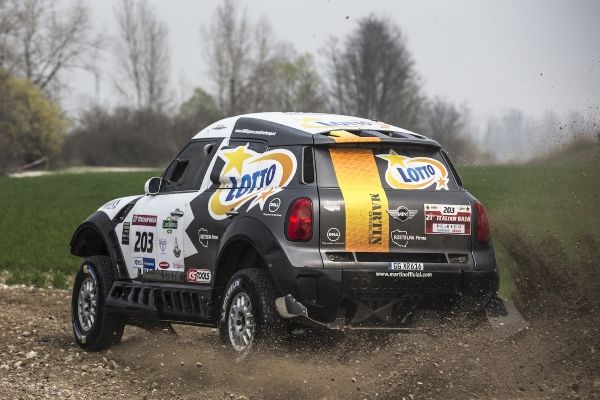 Munich (DE). The FIA World Cup for Cross Country Rallies is in full swing. The next great challenge on the race calendar, the third, comes in the form of the Abu Dhabi Desert Challenge, from 6th to 10th April – the 4th rally of the year. MINI and the Monster Energy X-raid Team travel to the third round of the 2014 season looking to build on solid recent results.

In the 2nd round of the championship, the Baja Russia, local favourite Vladimir Vasilyev finished second in the MINI ALL4 Racing, which is based on the MINI John Cooper Works Countryman and fourth at the 3rd round, the Baja Italy. His young team-mate Martin Kaczmarski (PL) came home fourth and fifth.

There will be a much larger contingent of MINI ALL4 Racings on display in Abu Dhabi. The X-raid team will run six cars in the desert. Among the drivers in action is Dakar winner Joan “Nani” Roma (ES), who returns to the cockpit for the first time since his triumph at the toughest rally in the world back in January of this year. The Spaniard arrives as defending champion, having won last year’s Desert Challenge.

The Abu Dhabi Desert Challenge was first held in 1991. This year’s demanding route takes the competitors on a 2,015.8-kilometre trek through the desert. The conditions are very similar to those encountered at the Dakar Rally: fine desert sand, in which the cars can easily become stuck. This season, the MINI ALL4 Racing has already proven on more than one occasion that it can reliably, and seemingly effortlessly, overcome these extreme conditions.

The chassis of the MINI ALL4 Racing is perfectly designed for rallying in extreme conditions. In total, the MINI ALL4 Racing is about five per cent larger than the production version of the MINI John Cooper Works Countryman. The overwhelming majority of the body is made of carbon fibre. The roll cage’s integrated steel pipes meet aircraft industry standards (as do all the steel parts). Parts of the roll cage are bonded to the monocoque. The enclosed passenger cell is the only component of the car that cannot be taken apart, while all the remaining parts on the MINI ALL4 Racing can be dismantled separately into other individual parts.
Undercarriage/Transmission.
The MINI ALL4 Racing is equipped with a Sadev six-speed, sequential gearbox with six forward gears and one reverse gear. When starting the car moving, the gears are shifted using the AP Racing clutch. Once the car is in motion, it is possible to change gear without using the clutch. As on the production car, the gear lever is located between the driver and the co-driver. The gears are not arranged in the conventional H pattern, however. The gear lever is simply moved
backwards to move up a gear and forwards to move down a gear. The clutch is a multi-plate, sintered metal clutch, in order to be able to transmit the large amount of torque from the engine. The MINI ALL4 Racing is also equipped with lockable oil-cooled Xtrac front, middle and rear axle differentials.

The diesel engine that powers the MINI ALL4 Racing was designed by BMW Motoren GmbH in Steyr, Austria, to be used in endurance races under the toughest conditions. The TwinPower turbo engine with a capacity of 2993 cubic centimetres generates over 300hp at 3250 revs per minute. This allows the MINI ALL4 Racing to hit a top speed of 185 km/h. The diameter of the air restrictor is 38 mm. The engine is also equipped with a dry sump lubrication in order to limit the overall height and guarantee optimal lubrication under extreme conditions. The wiring was reduced to the bare minimum in order to further reduce the weight of the car.

The MINI ALL4 Racing is equipped with Michelin All-Terrain tires in size 245/80R 16. In addition to the four tires mounted on the vehicle, up to three spare tires are also located in the rear of the MINI ALL4Racing. The inner-vented, steel disc brakes (320 millimetres by 32 millimetres) are air-cooled on the front axle and water and air-cooled on the rear axle (six pistons each). The shock absorbers (four on each axle) are fully adjustable. An adjustable roll valve can be used to change the car’s roll. The damper oil is cooled via an external reservoir, which allows a more continuous dampening and a longer damper life cycle.

The cockpit of the MINI ALL4 Racing provides the drivers with a lot of space. Both driver and co-driver sit in specially formed Recaro Motorsport seats and are secured by six-point harnesses. The HANS (Head and Neck Support) safety system is also used. The dashboard in the cockpit is made of carbon fibre and consists of three parts: a driver dashboard, a centre dashboard, and a co-driver dashboard. The information displayed there is reduced to the bare minimum. The driver sees a gear display and a switch symbol, indicating that he needs to change gear. Central information, such as speed, oil pressure, temperatures and electronics information are displayed centrally, thus making them visible to both the driver and co-driver. This element can be removed and replaced within three minutes, thus optimizing servicing times should it stop working for any reason. The co-driver dashboard contains the navigational elements.